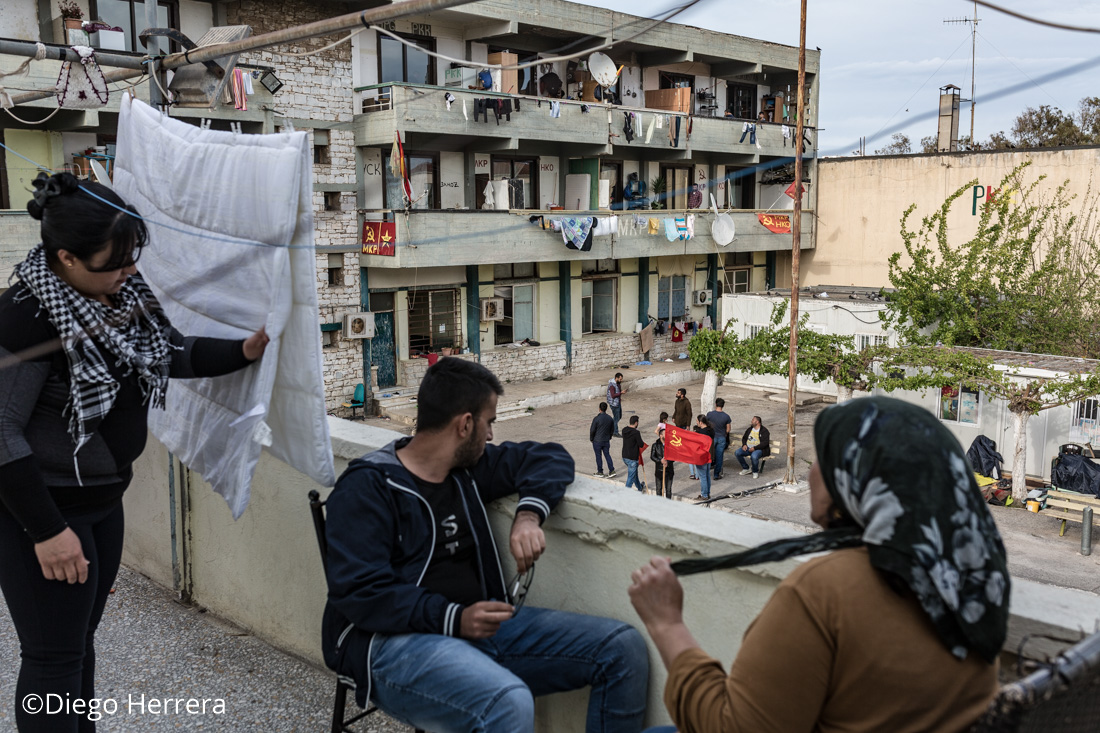 From Kobane to Lavrio, one trip and two battles for a kurdish Refugee

Among the refugee camps that can be found in Greece, there is one that curiously attracts attention, is Lavrio, a village in southern Greece. In it, we find those people of Kurdistan, that unrecognized nation that hosts a population with a great social conscience within the Arab world. A people punished on all over flanks and nevertheless still stands.

The Kurdish population finds itself in unsustainable situations in its places of origin as a result of political persecution or because of the war that has continued in Syria since 2012, and that is why a large percentage of its inhabitants decided to flee their land in search of a decent home. After crossing the Turkish border and reaching Greece through a piece of the sea that has taken many lives, they arrive Lavrio, a village where Kurdish refugees have built their own camp. This place, an old school, has been adapted to make it something like a home. The main characteristic of this camp is that it only takes the Kurdish population and is managed by the PKK (Kurdistan Workers Party), whose sympathizers/militants are persecuted by the Turkish government.

In the old building as soon as we enter we find a kind of bar that I would call more correctly, a social center, where they usually get together to talk, have tea or just watch TV or play chess or checkers. The place is spacious, luminous and together with the hospitality of those who frequent it gives it a charming touch and makes it look like you are not in a refugee camp, it is undoubtedly the closest thing to a home I have seen inside the refugee camps.

However it’s not all so good, the building is not in very good condition, there are leaks, the rooms are small to accommodate so many people and the running water and their respective drains are not also in good condition.

The children are part of this refugee population and the most vulnerable, what they live there will mark them for life. These children have a classroom reserved for them so they can receive an education that allows them, at least, not to lose the thread of the rest of the children of the world, although that is very difficult since they cannot always accede to a teacher…

In Lavrio we find a great hospitality, from the first contact everything has been facilities for the journalist, something unusual in the refugee camps of the Greek government, it is noted that this camp is managed by the refugees themselves.

Among this great community and Kurdish family, I meet Ahmoud (not his real name), fighter of the YPG – Kurdish militias for the liberation of Kurdistan – in Kobane (Syria) and Kurdish refugee in Lavrio (Greece). This young man took part in the Battle of Kobane, which took place between 2014-2015 in Syria and confronted the Kurds of the YPG/YPJ – together with other countries and armed groups – with the feared Islamic State.

He is a 33-year-old Kurdish refugee who has a wife and two children living in Turkish Kurdistan, emigrated to Europe fleeing the Turkish government, to find a better life for himself and his family.

Ahmoud was living in Turkish Kurdistan in 2014 when the Battle of Kobane, a city in northern Syria belonging to Syrian Kurdistan, started an essential battle against the Islamic State and for which the PKK requested help from the Kurdish population in order to join the ranks of the YPG/YPJ and thus combat Jihadist barbarism.

Without thinking about it and moved by his convictions, he traveled with a friend from Turkey to fight for 4 months with the YPG to the Islamic State in Kobane.

On the front line of battle he was for several months together with some friends who joined the call of the PKK, several of whom died. In his days as a Kurdish militiaman, he saw only a few meters from his face the bloody fighters of the Islamic state whom he claims to have heard most of them speaking in the Turkish language. Ahmoud acknowledged that most of the fighters of the Islamic State in Kobane were Turks, “on one occasion we boarded a car coming from Turkey and discovered that its passengers were going to join the Islamic State”

On the battlefield the YPG/YPJ fought in groups of 5 or 6 Kurdish militiamen, of which 3 or 4 were women, these formed the YPJ, who led the group and “the best fighters” said Ahmoud. In fact, for the Islamic state to be captured or killed by a woman is humiliating.

In the long combats in which he participated, he saw the real atrocities committed by the Islamic State. On one occasion, he watched in horror as 250 civilians were killed in the streets, including children and women. The worst scenario that he was found and that is indelible in Ahmoud’s mind is the image of four children with their necks cut off… their sad face and their head down gesture when he tells me about it describes everything that he lived.

During those hard four months, Ahmoud admits not knowing an approximate number of jihadist casualties he may have caused, “in a combat situation like that it is difficult to ensure a figure” said the Kurdish militant. However, he does claim that his combat group – he estimates – was around 10-15 jihadist casualties.

In this battle the international support was led by U.S. and French planes that bombed from the air positions of the Islamic State in Kobane “although the Americans gave less support” said Ahmoud.

After defeating the Islamic State in a hard, historic and transcendental battle in Kobane and saving his life, something difficult in a war as atrocious as the one lived in Syria, he returned with his family to Turkey.

As a result of that fear of that situation he had to endure in Turkey, he had no choice and he have to flee to Greece a few months ago. Since her flight from Turkey, she resides in the Lavrio refugee camp, where her life story continues but this time stopped at the gates of Europe and with another hard battle to face, the borders.